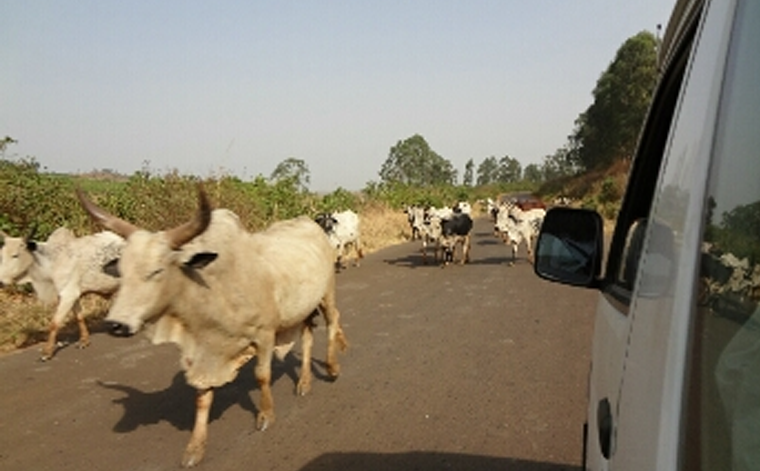 Matthew 9 tells us in verse  35 Jesus went through all the towns and villages, teaching in their synagogues, proclaiming the good news of the kingdom and healing every disease and sickness. 36 When he saw the crowds, he had compassion on them, because they were harassed and helpless, like sheep without a shepherd.37 Then he said to his disciples, “The harvest is plentiful but the workers are few. 38 Ask the Lord of the harvest, therefore, to send out workers into his harvest field.”

Every November for the past number of years Dan and our former Pastor, Ivan Veldhuizen have bought lunch for each other for their birthdays.  After they visited for a long while, Pastor Ivan said to Dan, “Would you ever consider going to GECHAAN and partnering with Art and Dorothy Helwig?  I would like you and Tina to pray about it.  Well, at this moment, Dan knew THIS was finally what God was calling us to.  He came home that night and asked me if I had ever thought about going to Nigeria and I said, “I thought about it briefly because they have such a cool ministry there, but we’re not missionaries and I didn’t think it was in the area you might want to pursue.”

Thus began our “official” GECHAAN journey.  We filled out bunches of paperwork and oodles of tests and questionnaires and VIOLA!    Steve Valentine at Converge was able to get us in to the Missionary Assessment Center in January.  We went to Orlando and went through the MAC and were approved with the condition we go to Nigeria (since we have never been there) to see if it was a good fit for us.

In March we went to Gembu, Nigeria and it was a very overwhelming experience.  We discovered there were so many things going on there at GECHAAN that it was hard to even remember all the different programs and ways they were affecting the community in that area through programs in the past or the many present programs and ministries that were going on.  We loved the people and we loved the area.  It is on a mountain plateau and the temperature during the day is 80 degrees and 65 at night.  The only challenge in this very remote place was that it was so far away from anything but a lot of people needing to know of God’s love and healing and restorative power.  It is typically a 2 day drive to go to or from the airport in Abuja.  This is not only because of distance, but because the roads are kind of come and go or sometimes, gone!

Well, on our way home, we were coming to what we thought was a check point, and the Nigerian driver, Peter, realized that it was not as we started slowing down to stop.  He sped up and the man with an AK47 started shooting at us.  They were trying to take out Peter, as he was the driver, and he had a bullet cut the tendons and nerves on his little finger and ring finger as it passed over the top of his hand.  Jim, in the front passenger seat, got something from the dash that hit is inner leg and glass from the windshield and bullet fragments in his head (he had just put his sunglasses on shortly before that)  This saved his eyes.  A bullet went entered my upper left thigh and came out the front of my leg.

I want you to get this picture, we are in a Diesel Mini Van being shot at, going as fast as we can to get away.  We get down the road to where we think is a safe distance and stop to access damages.  Jim and Peter were bleeding badly.  We wrapped cloth around the bloody areas and decided that we needed to continue to get them help.  We went down the road a short distance and the van stopped.  The bullet had gone through the radiator and we were out of water.  We wrapped them up in t-shirts and some people stopped and sent for someone with enough room to take them to the Bali clinic.  Jim  had a white shirt on.  It was soaked with blood, and of course, we didn’t know if he had a bullet in his head.  Peter’s hand was bleeding so badly, we needed them to get to help.  The car came and took them to Bali.  We are sitting alongside the road, trying to not look like a target.  I remember after the van stopped and we were sitting alongside a road in the middle of nowhere, Nigeria just crying out to the Lord.  “God, please don’t let the shooters come and kidnap us, Lord, help Peter and Jim to be ok.  Lord, please help.”  I have to say that none of us were panicked, we all kicked into action, and felt that we were going to be OK, but reality was saying, “You’re in a dicey situation here, Honey”.  On top of this, I thought a bullet had grazed my leg,  Dan had bandaged the 1 hole that he saw on the back of my leg, I didn’t put that together that I could only see the hole in the front of my leg and it wasn’t bleeding very badly at all, so I’m a little maimed, but not worried about that.  I am sitting in the van, looking out the open door at a little pond or river or something in the middle of the typical terrain there and praying.  Dorothy is calling Ivan (Our old Pastor, who is now the Director of International Missions at Converge) to apprise him of the situation.  She is also trying to contact the Bali field office to see if someone can come and help us.  My husband, a very resourceful individual, figures that the radiator has cooled down by this time and he fixes the radiator hose with a granola bar wrapper and packing tape while Pete, our other traveling companion, goes to the little river with our empty water bottles to get water for the radiator.  We made it to the Bali hospital with the Bali field office team following us.  We get to the hospital, which is an open air area with rooms around it.  Lizards and people sitting everywhere.  A nurse is pouring peroxide over Peters hand continuously.  Blood kept running and running as the peroxide washed over it.  They gave Jim stitches in his head and leg and tried to get out most of the glass.  A baby boy died while we were there.  I heard wailing and asked the woman who was sitting by me what had happened and she told me.  We had to get a police report, police escorts and eventually made it to the Makurdi hospital where I found out I had a through and through in my leg.  This meant I.V. antibiotics in the hospital overnight.  Jim, Peter, and I spent the night there.

I will continue next time with “the rest of the story”.  But todays point is:  God’s reality and human reality are totally different.  We are so finite and He is so infinite.  Our brains can’t even go there!!