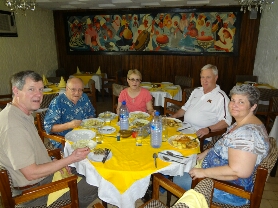 Yesterday was one of the “memorial days” for our journey to Nigeria. March 22, 2012 was the fateful day that we were on our way back to the airport to embark on our “missionary adventure”.  After deciding that, Yes, this is where God wants us, we can’t do it ourselves, the job is too big for us, for anyone.  Art and Dorothy assured us that what they have done the past 10 plus years was listen to God’s leading and people were helped and God was glorified.  We decided that, yes, we could do that!

We were excitedly talking about the mission trips we would have and the groups we could get to come help us when we rolled up to that fateful “check point” that wasn’t a check point.  It was an attempted robbery.

It was a confusing day, it was the longest day of my life thus far BUT it was a good day.  Let me tell you why March 22 is a “pile of rocks” memorial in our lives.  That was the day that God spoke to each of us clearly and loudly amidst the confusion, fear, and blood He said, “This is where I want you, I will take care of you”.  Immediately we were assured of His plan and we knew we were going to be okay.

Even amid Boka Haram violence, Ebola scares, and tribe riots we have not had fear.  God already told us and showed us that He had our backs and He was in control of EVERYTHING.

My leg healed about 8 months after the incident, Jim’s head and thigh healed up, Peter’s hand has nerve damage and he can’t move his ring finger or little finger but it is usable and healed.  Does Peter fear driving now and those check points?  No, he travels hundreds of miles a month most months and is the same cheerful, singing, talking Peter the Driver that he was before.

What if we would have taken this unusual way to start our missionary career as a sign from God that Nigeria was not where God was calling us?  What if we had not listened and let fear get in the way of His assurance?  I tell you this, WE would be the ones missing out.

It is an amazing thing to stand back and see God work, sometimes through you, sometimes through the people around you.  Working in people’s hearts and lives.  Do we just stand back and watch here in Nigeria?  No!  It was a lot of work to get here and every day there are hard decisions to make and a lot of things to do.  I just think what if we weren’t here?  Not only would we be out of God’s will, but so would the people that God wants to use here.

I know I am kind of rambly today, but I do have a point.  My point for today is this:  Are you listening?  If God told you to do something or go somewhere would you and your spouse know that it was God?  Would you do it?  I have to tell you something, in Dan’s and my marriage God has always worked on both of us at the same time.  I can name so many instances that we were at the same place at the same time and knew it was God.  Then we took the next step.  Straight Ahead, as our dear friend, Pastor Joel says!